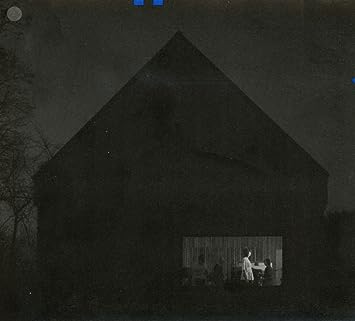 Spoiler alert: music of a modern nature and I are still getting to know each other better.

Sure, I have my bands (the xx, Unknown Mortal Orchestra, Tedeschi Trucks Band, to name a few) but I am confident that when it comes to most modern music, I’m going to be searching for comparisons to the era I’ve loved before: the 60’s, 70’s and the 80’s before hair metal.

Reactions, moments and memories with music made pre-1982 make themselves aplenty. Modern comparisons? A little scarce.

Let’s just start with the obvious: Matt Berniniger. He’s roughed—his voice rumbles awake on “Nobody Else Will Be There,” falling down each key of Aaron Dessner’s piano and breaking his chemistry set. You can tell he’s in a bad mood.

Where Cave would mope and growl (as is his wont), Berninger talks, whispers, grovels and coos his way through the earbuds and settle into the cerebral cortex such a distilled manner. On the first listen, time flew on a wing, his voice escaped past me while I gazed at my shoes.

Vocal highs can waver like a Berlin-era Bowie and ground themselves six feet under the concrete jungle Bruce Springsteen was born to run, but on “Walk It Back,” it’s all Berninger who crawls up my spinal cord to talk over this whole “on-again, off-again” marriage thing.

But the pipette worked its alchemy: brimming up the emotional test tubes. Filling flasks with flaky emotionality, brimming beakers with doubt and while music retorts, clicking away in digital clockwork drum machines and scratching along on slide guitars.

Halstead mixes his voice like a texture, understanding what he’s saying is fourth tenth twenty-third on his vocal to-do list. Slowdive’s instrumentation too, stays in a synthetic moog-y space to give a foggy sense of dread and melancholy. Berninger’s voice manages to capture these emotional pitfalls but never falls out of the mix.

The National finds themselves in that same dreamy, melancholic space—but holy hell if the music is qualifiedly defined and easy to spot. Stupid is what stupid does and stupid says these two bands influenced each other.

Hell no, they just ended up in the same emotional place with vastly different approaches.

Slowdive, in all its sleepyhead shoegazing glory, never matches Sleep Well Beast’s roots in alternative post-punk. Ever defiant with scratchy guitar runs on “Day I Die” and “The System Only Dreams in Total Darkness.” The lyrics decry the interpersonal and societal relationship breakdowns through and through: wanting do-overs, struggling for explanations, dreaming of solutions:

By “Walk It Back” Bryce Dessner switches into slow grooves. Spaced melodies quicken by the solo, but the message remains clear:

The never-ending fight makes morose the man. And moroseness moves throughout the record, yet never transforms into laziness. From the scaling “Nobody Else Will Be There,” to the drunken plod of “Born To Beg” through the bruising pangs of “Carin at the Liquor Store,” Aaron Dessner punches heavy-weight keys all record long.

If nothing else, that piano makes this album worth listening to. The last time I said that about any band I was in Australia listening to Eskimo Joe’s third effort, Black Fingernails Red Wine.

But the purple sore spots have nothing on the percussive punches of Bryan Devendorf’s drums. Distorted into a stadium sound yet muted with an eerie closeness, he brings the listener into the sparring ring for the dozen bouts.

Some albums demand re-listens before the first song even ends (see: Blackstar), Sleep Well Beast demands repeat listening somewhat later, once the cuts have finally sunk in and the itch to listen keeps scratching all day.

Either way, Sleep Well Beast is immaculately crafted. A subtle creature that doesn’t play its hand on the first round. Either way, it’s best to keep playing.

Quick Impression: Sleep Well Beast is a trickily quiet album for a genre that relies on fuzzy noise and scratchy snarls. The National wants to keep it subversive and quiet but never muddled. The result? A record worth listening to, then put down, and then listen again for the whole of tomorrow.

Temple of the Sea