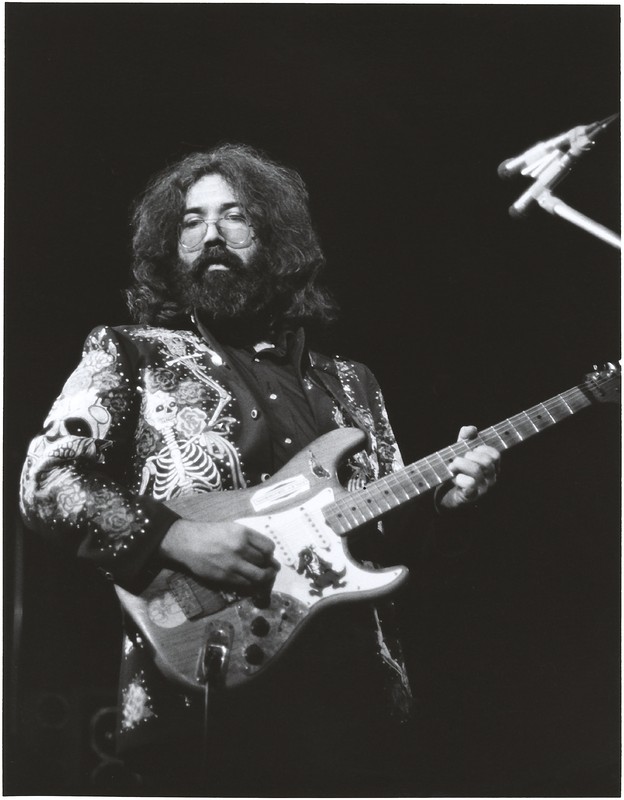 “Jerry Garcia in a Nudie’s of Hollywood suit,” – Brad Temkin

Jerry Garcia’s hands feature some incredible digits. Fingers tight-wind licks melodic, notes wash along the neck with Poseidic chop, bobbing and turning the mind upon the driftwood of a psychedelic Ionian Sea.

With Howard Wales, the Jerry Garcia Band, New Riders of the Purple Sage or any number of live recordings of the ol’ Grateful Dead, he plunges into an ocean cacophony fathomed by pianos, rhythm, bass, drums and the mind. Bending 12-bar blues into the mountain waves of minutes. He’s searching the dark blue beyond for a harmony.

He’s in his temple of the sea.

The effect incenses congregations of Deadheads with the appelation of “spinner” who, sensing the air of the service has filled with the thick water of the deep, find it best to swim through the melodic soup and swim along the clerical wave in a manic twirl. Long hair, long skirts clip the breeze. Their hands of worship start lead, licoricing up and down as eyes close and feet turn on a wind.

But I’m not just spinning my own two feet. My hand still leads in a twist and a roll. My wrist, forearm, bicep, shoulder, neck, shoulder, bicep, forearm, wrist follow—memory moving muscle in anagram sequence. The foam kisses the skin, sticky, the sublime slip feels like the crisp folds of origami paper. Everything confirms it to be right. The released wrist, the skin stretching from fingertip to fingertip, the hair standing on the back of my neck, the staff securely on hand.

Each confirmation plays notes pitch perfect whether in silence or bedlam. Mastery shakes through the bones with the gravity of a cathedral bell.

The runner, ahead by a mile, strides off this energy as his foot flies to the next patch of ground. The artist, covered in colour, paints in it with each stroke; every hue a schooner across the canvas. Jerry Garcia, on the edge of his fingers, hands sowing together a melody like a sail in nigh-chaotic cross stitch.

The firespinner, hot on a wick or two or three or more, burns for this energy. This state of total flow. Thought relegated, the body and mind responds to the immediate. Sentences strike loquacity. Phrases pass no um or uh. The movements play out in hexadecimal to the casual observer but to a spinner, it’s binary: yes or no.

No longer does the body log along the waves, the mind loses itself on a horizon, the soul buoys the ocean. Spinning, with fire or no, is to surf along the crest of Jerry Garcia’s hands. Just writing that I am inhabited while inhabiting the music doesn’t cut it.

Garcia once commented the Grateful Dead’s music features the architecture of conversation within each studio record, no less live, which speaks directly to listeners. It speaks to the flames spinning across my chest, arms and neck. It speaks to the beat that courses through my spine, lighting the nodes of every nervous cord like beacons. And it speaks even when it’s just Garcia alone, conversing no matter how long into the groove or how far into the spin.

And when the music talks, the body responds. The body rides along.

Riding along the wave of a Grateful Dead jam, however, is but one form of conversation. Classic rock can’t help but rollick the boat whilst it rows. A far cry from the soft R&B crush of the xx, which clicks and snaps and pulses with a muted menace, but as if coaxing my self-anxious self into spinning catharsis.

By transforming the musicality from mountainous waves into mere hills, the xx crafts whales from the plankton. Meager accompaniments become main attractions. Debuting in duets, xx often pairs vocals and singular musical instruments over the percussion. Vocals harmonize together, but call-and-respond to the guitar licks conjuring keyboard textures.

This soft dance music, relying on a direct link to the heartbeat, tries to tackle waves in a less chaotic fashion. Key word: tries. Whether computing or calculating or capturing time in a bottle, it can’t help but create waves of its own. Daring me to fail lest I never learn to sail.

The result is an album that crafts itself in a scary space: heartache. A simple fright—but no less compelling than The Grateful Dead, Tame Impala or the Derek Trucks Band—it’s just good music. Music that wants to talk to me, whisper in my ear, thunder through my chest, call to attention every hair on my body.

No one who has ever loved can say otherwise.

But in recent nights I have found no desire to press next turn or bring water to boil or skim through my Portuguese lessons. Because they don’t matter. Only two hobbies, or interests or whatever they can be called, course through my mind. I am compelled to write because I love to write and so, I write. I am compelled to spin because I love to spin and so, I spin. To love is a compulsion.

It can seem and feel like a self-flagellation when the world isn’t turning out right, constantly spinning in uncertainty. I run through this emotional wall redder in the face than the Kool-Aid man at double pace. The Earth has spun itself all the way to today, uncertain of if it too, will stop tomorrow, next week, next year or in the next 10,000.

When the staff circles a time too many, it is uncertain where it may end up in the immediate. Eventually, however, it finds its way back in my palms.

When the xx drops into their instrumental breaks, so too do I dance, spin and then write of a heartache that has happened and will probably happen again.

When FKJ’s guitar notes, vocal samples and percussion pop to-and-fro in unison, so too does my staff toss itself from wrist to wrist.

When the National’s “Nobody Else Will Be There,” picks up and scales down along the piano keys, so too does my staff climb across, under and over my body with no stopping.

When the psychedelic haze of Tame Impala thickens, so too does mental concentration congeal: everything around the self oozes away as sweat seeps out from the walls of the temple.

This is my sacred space. My holy place. My temple of the sea.