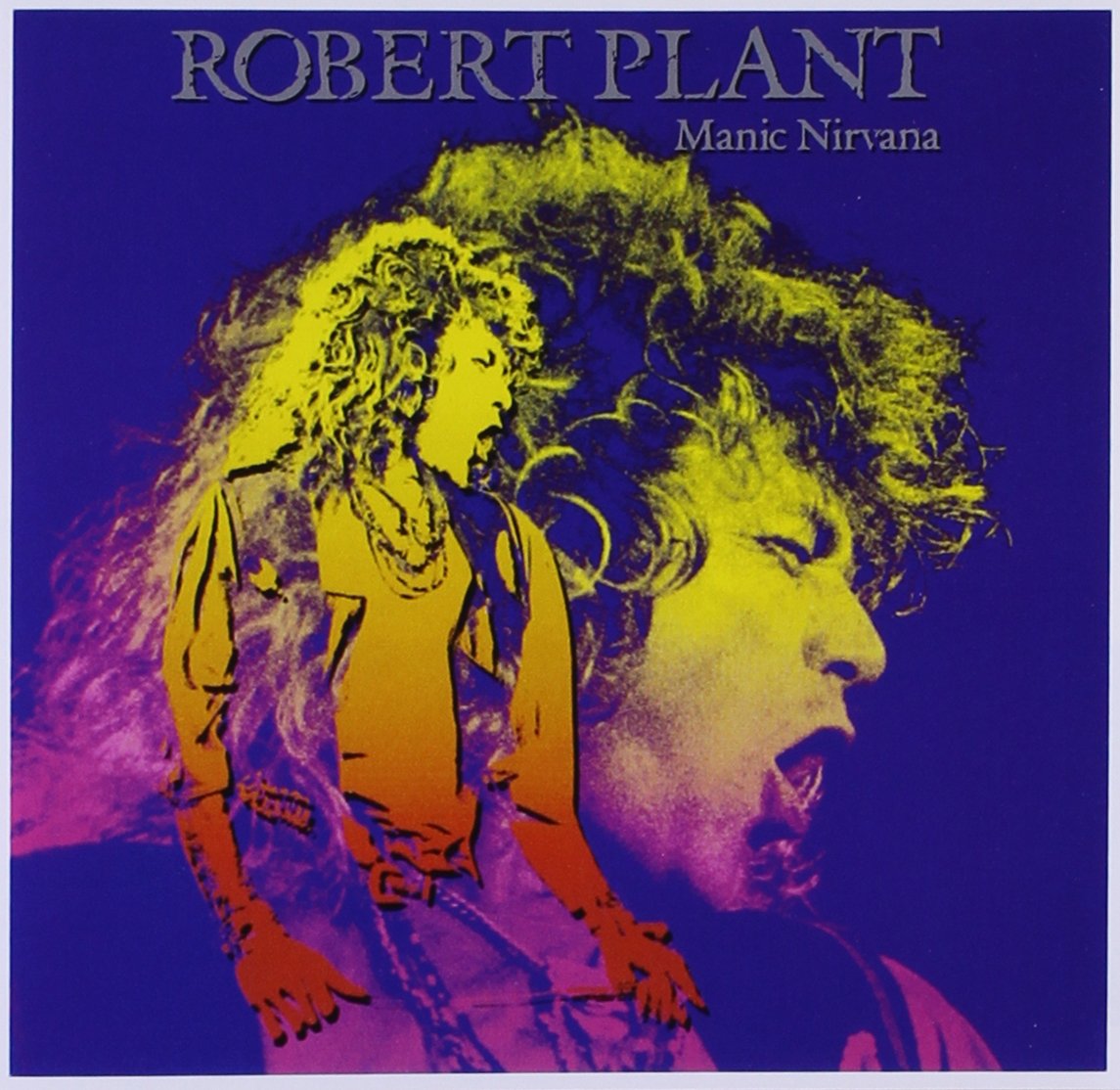 This might be one of my favourite album covers ever

Yes, Now and Zen reintroduced us to Robert the musical explorer.

Yes, Now and Zen did more for Plant’s artistic direction.

And yes, Manic Nirvana never builds in that direction much further.

But man, whatever alchemy brewed in that renaissance apothecary was strong enough to create a second, unstable elixir that’s more fun than the first. Records can balance both a seriousness with riot-inducing sound but Manic Nirvana trades in Now and Zen’s serious tone for more of that riotous rock. Between the record’s raucous cuts like “Big Love,” “S S S & Q,” and “She Said” one would think this album reached its quota of tantric release. “Wrong!” wails the aptly manic “Nirvana,” in the throes of a sexual climax unheard since 1968’s Zeppelin I. Showcasing the vocal power that made Plants voice so compelling, each “love you” thrusts harder and faster and there’s nothing you can do about it.

But Plant’s not the only the one having some not-so-clean fun on this record, Doug Boyle’s riffs are bigger, nastier, dirtier and a metric shit ton more fun. Boy howdy, did he lose whatever timidity he still had on Now and Zen and just lets his guitar rip like a chainsaw. The album builds steam consistently, with only a slight misstep by cutting off “Nirvana” a little too soon. Not until “Anniversary,” which veers off into an eighties stadium sound better reproduced on “I Cried,” does the album tread into “meh” territory. But then an unexpected acoustic “Liars Dance” pulls the listener back in and it’s all good.

In fact, between this sentence and the last, I went back to listen to “Liars Dance” and scratch that, it’s not just all good—it’s fantastic. Acoustic Plant was a rare sound post-Zeppelin but give him some fingerpicking good melodies and damn does he do work.

It refreshes the taste buds to hear that again.

I do wonder if there was a similar idea Plant had with Shaken ‘N’ Stirred. Whereas he wanted to transmute a Principle of the Moments sound into peppier grooves, with Manic Nirvana, Plant wanted to distill a more straightforward sound from Now and Zen. To avoid any pitfalls, however, he relied mightily on his Now and Zen chemistry set, working at maximum to concentrate every possible rock’n’roll element of that sound.

More Blackwell on drums, more Johnstone on keys, more Boyle on guitar, more Jones on bass and more Plant on vocals–all working like mad scientists. Excepting cuts like Now and Zen b-side “Tie Dye on the Highway,” a stadium swinging cover of “Your Ma Said You Cried in Your Sleep Last Night” and the acoustic “Liars Dance,” the resulting record is more rock for less thought. On “Your Ma,” Plant even finds the time to figure out how to make appropriate references to his Zeppelin work. Lyrics. No need for a jarring eleven second montage. Just lyrical motifs.

No erratic, lockstep pace holds Manic Nirvana back, instead the Robert Plant express steams forth with no time to lose. In all its manic glory, no less.

This album may not challenge like its predecessor but it also realizes the tiring nature of that challenge. Pair that up with the steadier producer hands that Plant has thus far accrued and Manic Nirvana does better at being a rock record than Now and Zen does at being a rock fusion record.

Note: “She Said” is not on the vinyl LP. *sadface*

Slowdive: The past never sounded so modern.