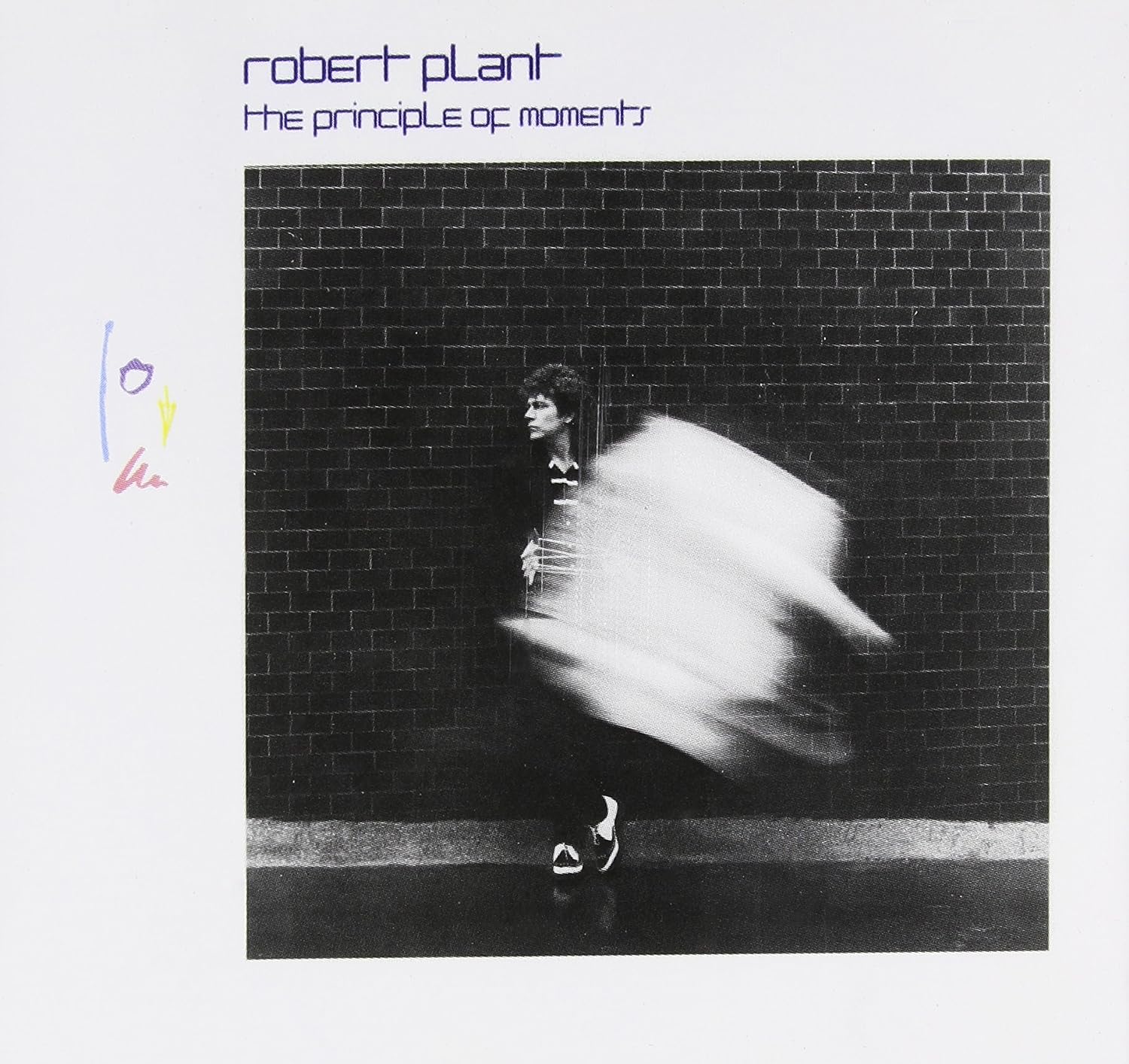 Midway through The Principles of Moments I realized something:

I didn’t even know which Robert Plant album I was fucking listening to. “God damnit,” was, as usual, my internal dialogue, “how can I forget the name of an album I just put on?” It’s not like I wasn’t enjoying the album. “Other Arms” promises a goddamn good follow-up within its opening beat and cruises atop the road that Phil Collin’s drumset built.

Not bad. The guitar from “In The Mood” also pops and rocks back and forth on its synthesizers and Phil’s fills on the drums. And god damnit, sometimes that’s a groove my butt can swing to. Then “Messin’ with Mekon” and “Wreckless Love” feature some more of Robbie Blunt’s riffwork and like a gym regular, he puts in his reps with little sweat. But for real, the highlights reel starts rolling with “Thru’ With The Two Step,” when Blunt ties the knot of several vignettes inside Jezz Woodroffe’s cathedral of an organ and continues on “Horizontal Departure,” where everything is married to everyone and everyone is at the top of their game.

But seriously, what’s the difference between Pictures at Eleven and The Principles of Moments?

Let’s start from the basics:

The latter struggles to carry my attention later in the album. It sounds like a simple continuation of its predecessor by the start of side two and “Thru’.” Principles is, beyond a doubt, still well-produced. But Plant stands pat with the sound he produced on Pictures, there’s barely a hint (although that hint does save “Wreckless Love”) towards any of the musical springs that would unbind him come Now and Zen. I sound like an old fucker complaining about how Robert Plants not taking any chances and I am!

Well not old, but still, old soul’d and with plenty of complaints.

The melodies on “Other Arms,” “Thru” and “Big Log” continue the trajectory path of Pictures. But the elements on some cuts like “Messin’ With The Mekon,” with its solid walls of drums, or the outro of “Stranger Here” drag me on rides I’m not entirely sold on. Hell, while “In The Mood” is the clear pop single from the album, it’s not necessarily a top cut. If anything, it’s the sweetest-sounding ugly duckling from the first two albums.

Thankfully, Principles holds an ace up the sleeve: Plant’s voice. Whenever the ride feels out of control or scope from itself, Plant becomes the handlebar in the car on which one can grab reassuringly. Even if that doesn’t help when a cut crashes and burns and throws me headfirst out of the window. What, you thought a rock and roller coaster would have seatbelts? The Principles of Moments, nevertheless, settles just under Pictures at Eleven in the chronology of Robert Plant’s solo career. Neither constitute Plant’s best work, but the latter found a slow burn that is clearly lacking on the former.

And it only takes one missing element to make a difference. That lack of replacement for the slow burn means Plant dawdles in his blue suede shoes.

He probably just wanted to make sure he had a solid base of his own songs to call upon instead of a constant stream of crowd favourites—admirable for an artist with a catalogue as deep as Plant. Even more admirable? Despite the flaws, Principles sounds like the proper second album of what should have been a double album. However, it’s not exactly feasible to release a double album as a new solo artist. I don’t care if you’re Robert Plant or Jesus Christ Superstar.

No offense to Robert Plant, of course.

Listening to the album as such, rather than as a true successor album, explains the meager progress between albums. It works better when played back to back with Pictures, working as a complete manifesto for all the material Plant cooked up between 1980 and 1983. In that way, I enjoy it. However, when taken as a distinct product from Pictures, expectations lead to an underwhelming reaction. I guess I’ll just have to stick to a Robert Plant doubleheader, then.

Pictures at Eleven: Plant burns like an incense stick that won't quit.

Shaken 'n' Stirred: There was a darker timeline all along.