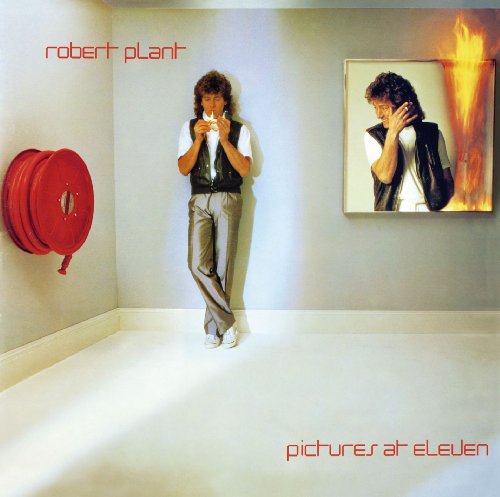 Perhaps I shouldn’t be surprised.

I mean, he did carry the big hair on his shoulders throughout the 1970’s. His band did carry the standard of arena rock to 1980. And his newfound production touch isn’t bad. But this is it, huh? Robert Plant the solo artist has come bearing a new pair of jeans and a curly mullet.

Yet of anyone who could slip into the eighties big-arena jeans, Robert Plant makes the best fit on Pictures at Eleven, jumping without a splash into his post-Zeppelin career. Perhaps the biggest name on the albums notes is Phil Collins. OK that’s a big name—but it’s not like he asked Jimmy Page to play guitars and John Paul Jones to lay down the bassline. Robert Plant went out and found his own talent. Changing zones from moaning tones on “Moonlight in Samosa” to a charging “Pledge Pin” and then a swinging “Fat Lip,” Robbie Blunt’s guitar licks and whips like a child’s tongue attempting to sculpt an ice cream cone much too big. The final effort slops around, but it proves effective.

Jezz Woodroffe plays the complimenting keyboards, working between Blunt’s riffs to provide a texture that bounces off the walls of an arena. Phil Collins even fills like, well like only Phil fucking Collins can fill behind the kit. And when it seems like there’s nothing else to give, Plant burns low and slow on “Moonlight in Samosa.” “Slow Dancer” burns even slower, an incense stick with a scent that sticks. But this is nothing compared to the lavender bath bomb that is “Like I’ve Never Been Gone.” It’s the part III of a trilogy comprising “Since I’ve Been Loving You” and “Babe I’m Gonna Leave You.” It’s finale you never knew you needed to a trilogy that never needed to be a trilogy.

You never really needed it, but at least it never implodes on itself. Plant 1, Coppola 0.

Blunt leaves little doubt on the admirable “Worse Than Detroit,” riding his hotrod fretboard with ease and machining together the mother of all chitty chitty bang bang motorized riffwork on “Mystery Title.” Gee whiz, I was not expecting this Robert van Dyke, but I’ll be damned if doesn’t hit the spot. At those spots, however, the buck the stops. This album could have been bad. Plant could have creatively curdled. He could have gone the full Rod Stewart.

He didn’t. But that doesn’t mean the album is near flawless or anything: the music may sound good, but nothing starkly stays in the brain. The album remains pleasurable, but there’s no moment where everything kicks ass so enormously over another moment. Pictures at Eleven truly plays as the incense stick burns—it burns solidly, it takes time to fill out the room and it can create some serious nostalgia. Perhaps the scent is even nostalgic. Recalling an era once present but now passed, Plant’s voice can do that sometimes. And that’s what Robert Plant fights on this album: crippling nostalgia. Pictures at Eleven came out in 1982. Two years after the *ahem* greatest rock and roll band of all time, Led Zeppelin, broke up.

(Fight me, Beatlemaniacs, fight me.)

Two years with only bootlegs and Coda to soothe the aching Zephead’s soul means that Robert Plant’s new solo debut may have drafted a warm critical reception but left a cooler first-impression among this Zephead. You could even say that the title hides the conceit. Newsflash: Zeppelin is dead, Pictures at Eleven. Come see and hear a world post-Zeppelin. Thus, Plant takes a full turn into the eighties arena sound for which, admittedly, Zeppelin laid down a foundation. But before Pictures at Eleven, Zeppelin was ready to take on punk, after Pictures at Eleven, Plant sounds ready to take on Dire Straits.

It rattles the senses of a Zephead to hear the voice of Zeppelin take a jump that the band never had the chance to. It’s a new twist to an old perfume. However, the two elements work in tandem. The old keeps bringing the listener back to the new and the new begins to the grow on the listener.

Translation: the newly single Robert Plant’s first journey into his own world of music had my ears and now it has my affection.

The Spark: The making of Reggaeton, Oregon